We had been looking forward to this day with trepidation and excitement.

When we arrived at Mitta Mitta Township Park, our guides, Smithy and Christian, were preparing for the safety and introduction briefing. Smithy went through the briefing with us all.  He made sure I understood all the safety aspects.  His explanations were clear. We had to follow each instruction immediately. The Sharks Tooth 1 is a dangerous category four rapid. Smithy didn’t want any accidents or people falling out of the raft.

We all drove our vehicles to the pull out point and left them at The Witches Garden on the Mitta Mitta River.  The Witches Garden is a bed and breakfast with “The largest collection of Medical Plants in Australia & is dedicated to preserving their history and folklore.”

The first part of the trip was on flat water where we put into practice what we learnt on the grass at the park. Every now and again I clashed my paddle with the lady sitting in front of me so Smithy had Roy call “stroke, stroke” on each backward stroke which solved the paddle crashing.

We had an opportunity to swim before the rapids.  I volunteered to jump in the cold water.  Smithy demonstrated a rescue for me to get back into the raft.  Roy also had a swim here.

The guides checked out how the Sharks Tooth rapids were behaving before rafting them. We all walked a short way down a rough track to watch them for a while. Smithy has 30 years’ experience rafting and safety is his foremost concern.

We watch the first raft fly down the rapids. Oh they’ve got stuck on a rock! “Everybody to the left side of the raft!”  Now they’re off and speeding down again.

After walking back to our raft, Smithy again stressed the absolute importance to listen carefully to his instructions. He didn’t want an accident as the Sharks Tooth rapids are named for their very sharp pointed rocks sticking up just like a great white’s teeth. We were ready for the adrenalin rush.

Smithy called “Ready? Go”! We shot through the white water.

Hold on!  Now paddle! It was pure speed, excitement and exhilaration for 300 meters.

We all wanted to do it again. After we successfully negotiated the Sharks Tooth Rapid we high fived our paddles.

Smithy relaxed once we were through. The Sharks Tooth 1 rapid is the longest rapid on that stretch of the Lower Mitta Mitta River. A few more paddle strokes and we dropped over the famous Weir Wave.

Then there were smaller Sharks Tooth rapids.

Very shortly afterwards we arrived at the jumping off rocks.  I chose to do the 2 meter jump which took a bit of courage.

We paddled to some other pools where Smithy organised some games where participants could run around the inflated side walls of both rafts racing someone in the other raft. Sometimes people fell off into the river.

The day was thrilling. The leaders were fantastic.

This adventure was on the lower Mitta Mitta River.  The Upper Mitta Mitta River has 18 km of grade two to four rapids. It is only navigable during winter and spring. Roy and I plan to do it in late July with Smithy and Christian. 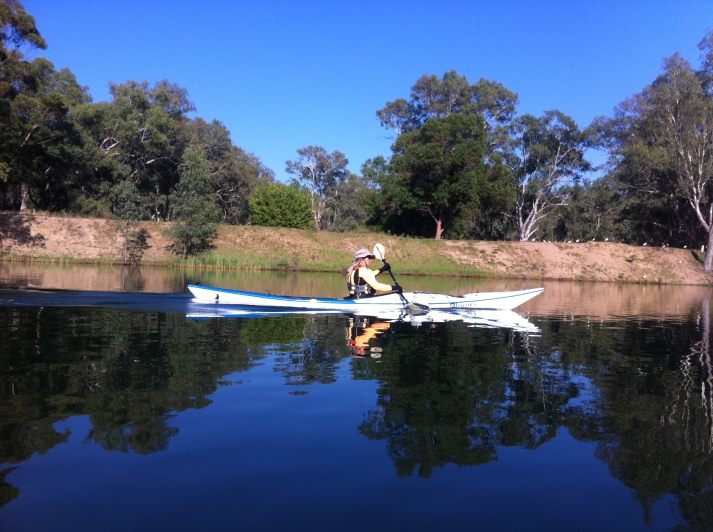 Bronwyn kayaking steadily down the glassy flat water of the Murray.

The Murray River flows downstream about 4 km an hour.  It is 30 km from Hume Weir to Noreuil Park. After a few phone calls we found someone with a trailer to drive us with our two kayaks the 30 km to Hume Weir. We launched just below the Weir at about 9:15am.

The river was tranquil with only the breeze whispering, birds twittering and the splash of our paddles as we floated downstream.  We were told if we followed the right-hand bank we wouldn’t get lost or go over a spilling weir.

After we had travelled 5 km I realised the GPS was not on.  Paddling to the bank we retrieved it out of the dry bag and started it. There are many beautiful places to stop and listen or admire the scenery.  Paddling down river was one of the easiest trips I’ve ever done as there was no wind, no waves nor was there any other craft to avoid. If we stayed in the middle of the river we were able to miss all the fallen trees and debris. Stopping for lunch was an adventure as the river was flowing so fast.  Paddling over to a little bay off the river proved a challenge as fast manoeuvring and a speedy exit from the boats was needed. I missed the little bay and was caught in the current.  Roy had landed at the bay and I was floating slowly downstream.  I quickly jumped out and held onto my kayak as the water was trying to drag it out of my grasp.  Luckily the water was very shallow and I won the battle.  The kookaburras were laughing at me while I was being swept downstream. 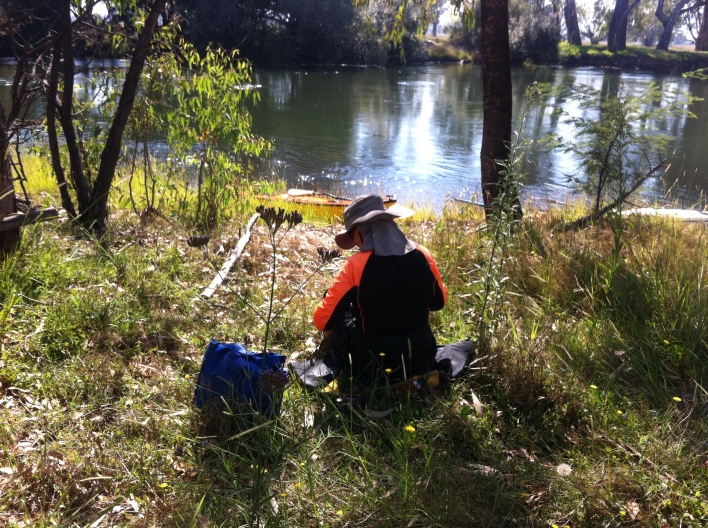 Sunlight bouncing off the Murray as we picnic on a tiny island.

Sitting on the grassy bank eating our lunch was delightful with the occasional kookaburra laughing and fish jumping out of the water and plopping back with a splash. Over lunch we dreamt of paddling to Adelaide along the Murray. After lunch we had to be quick getting into our kayaks before they floated downstream without us. During the second half of the trip we played a bit more doing races and speed tests. We landed back at Noreuil Park about 2:00pm with big grins, congratulating each other. By the end of the 30 km on the river I gave up ideas of paddling to Adelaide as I prefer the challenge of ocean conditions with salt and wind in my face and a swell to run down.

Albury has over 40 km of cycle tracks.  Riding is a good way to explore the city and surrounds.

We cycled from Noreuil Park following the Murray River downstream around a new cycle track.  The track follows an arts and culture trail linking Noreuil to the Wonga Wetlands. There are interesting sculptures along the way, all created by Aboriginal people.  We stopped at many of the sculptures to look at them. 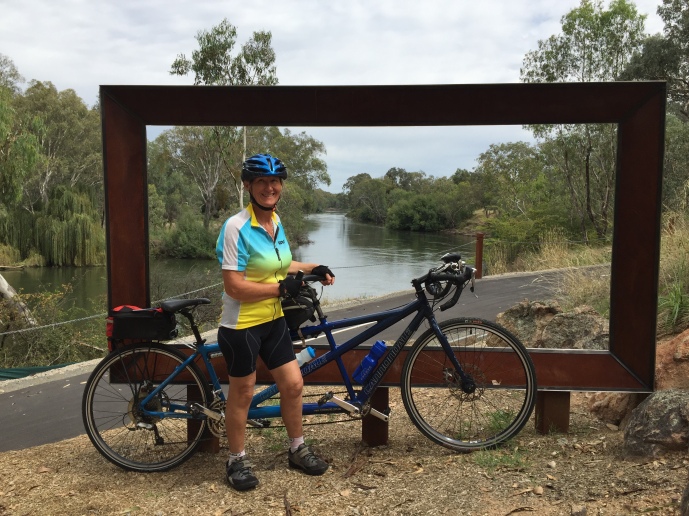 Bronwyn with tandem bicycle with a super sized picture frame and the Murray River and banks behind.

Wonga Wetlands has many billabongs and lagoons.

Some of the lagoons in the wetlands have algae growing and others are clear.  There is water being pumped through the clear ones.  I assume that the flowing water prevents the algae growth.

There are three walking tracks around the wetlands. Bicycles are forbidden, to avoid disturbing the nesting birds and we didn’t want to leave our tandem bike so we didn’t explore them.

From Wonga Wetlands we cycled to Bonnie Doon Park for lunch. I hadn’t packed a picnic lunch because I thought we’d pass a lovely café to eat.

No such luck.  The only place in the area we could find was a petrol station so we had cheese and biscuits with a tomato.

On the way back we stopped for a look at Albury’s Botanical Gardens which has an interesting children’s garden with painted trees, a couple of life size dinosaurs and delightful little fantasy creatures hiding in amongst the bushes. 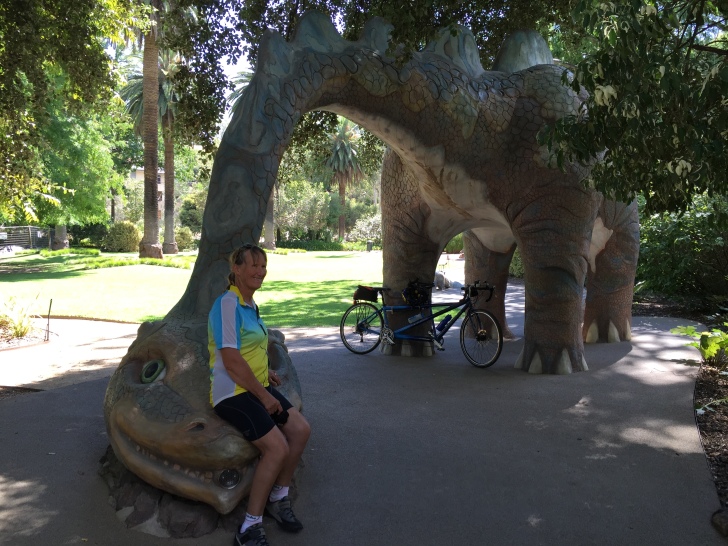 Bronwyn sitting on a dinosaur’s nose at the Albury Botanic Gardens Children’s area.

The total cycle was 40 km in the heat so at the end another swim floating 800 m down the Murray was very refreshing. 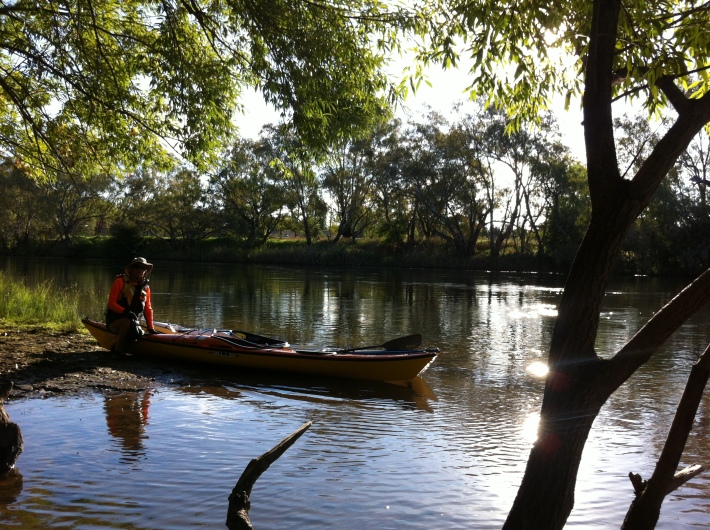 Bronwyn with kayaks on the Murray River bank near Noreuil Park, Albury.
The sun is sparkling on the water.

The kilometres passed quickly as we drove to Albury listening to an audio book.  We stopped at the Visitor Information Centre to collect brochures and see what is going on in the area.

There was a brochure about a canoe trip on the Murray for that afternoon starting at Noreuil Park.

Before going to the river for a paddle we walked down the length of Albury Railway station which has the longest platform and is a beautiful old building with very high ceilings .

After contacting the canoe group we found they were loading their boats on a trailer and driving 10 km up river.  Then paddling downstream.  Our boats were ready at the boat ramp so we agreed that we would paddle upstream and meet them half way.

Paddling upstream was going to be challenging with the fast flow. That was an understatement.  It was jolly hard.

Roy thought the river would not be running as fast at the edge so we stayed close to the banks.  Paddling for me was stressful as there were submerged branches to avoid and many turns in the river and I had to keep changing direction. Some times my kayak got tangled in the branches of fallen trees.

The river was flowing about 4 km an hour.  We were able to paddle at 8 km per hour for 3 km against the current.  We could see the canoe group in the distance so we turned around and paddled back with them.

A refreshing swim in the river finished off our first day.